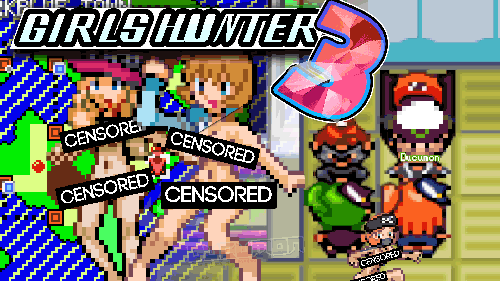 C’mon, Well, It has a new region with a new story, you can catch 10 kinds of pokemonrph girls and 50 catchable girls… It’s complete in English with a good story. And now, Let’s play it!

Norelia, an orphan who was adopted along with a girl called Aubree, decided to work for the kingdom after Fradia, the soldier who adopted them went missing. They worked under Lomie, one of the generals of the kingdom. But Lomie was manipulative and did not give them good Pokemon, they were only given weak ones like Rattata and Zubat so that she can always keep the girls in control, But Norelia’s ambition cannot be held back so easily…

FAQ:
Q: Is there a way to enter the hotel, or is it just there?
A: It’s just there, there’s nothing to do with it for real.

Q: Which moves are special attack and which are physical?
A: It’s still the generation 3 thing, the physical/special depends on the types themselves.

Q: Ive already beat the plasma island,mansion,calamity and battle tower but the slave island is unavailable and where zekrom tower?
A: You need to finish the Blackblood Hospital events as well, and Zekrom can be found in the temple which the first time you met her.
Q: I forgot where I met reshiram where is that placce again?
A: It’s in Maroon Town.

Q: I can’t find Sonia on Plasma Island, where is she?
A: There’s a path behind the pokemon center there, go north to look for a hidden cave.
Q: Oh I see her. Finally, how to get Undead?
A: You need to break several Odd Keystones first, there’re two on each of the floors of Mt. Rebirth.

Q: how to go tothe thorn island？
A: Do make sure no one is left in the dungeon in Plainland Town, find Sonia on Plasma Island, and rescue Nabelle in Blackblood Hospital.

Q: i got all of them but how do i get there?
A: You need to finish the Slave Market event, beat the league again, then go to Holiday Plaza, a boat there will take you to Thorn Island.

Q: ‘ve just started playing and wanted to know how the binds suit works
A: If you are talking about the Bondage Suit, it lowers the speed of the holder and makes ev training easier.

Q: How many cosplays are there in the game?
A: There’re 14 variations of Pokemon cosplayers and a kind of special milking cow cosplayer.

Q: Where I have to go after beat 5th gym?
A: Finish a event in Honeydew City then head to Navajo City.

Q: it blacks out entirely after i left the 7th gym
A: Are you talking about Ketaly’s Gym? If so, then I did check out that area and did not see anything which would cause the problem, sorry. Maybe you can try leaving the gym again to see if that still happens.

Q: How do I reach the slave market island? The boat girl doesn’t give the option for that
A: You need to get the VIP Card from King’s Mansion and then talk to someone on Metal Island to go there.

Q: Where can i find tiny or big mushroom?
A: You can farm them from Paras or Parasect.

Q: Inculding Diane on Thorn Island, that’s all 11 pokemorph girls right?
A: Yes, those are all the Pokemorphs in this game.

Q: How do I get to BB Hospital? Also where’s Lapras?
A: Find an exit in Gloomy Cave, reach the King’s mansion, finish the event there and then go through the cave on the right side of the mansion. Also, Lapras can be exchanged with 9,999 coins in the Game Corner.

Q: Where can I get a dowsing machine?
A: I guess you mean Itemfinder. It can be found on Route X13.

Q: where do you get zekrom?
A: Head back to Maroon town into the one building where you first encountered Zekrom and Reshiram.

Q: Where can i catch a farfetch’d ? For hm slave
A: Farfetch’d is not available in this hack, sorry about that.

Q: Where is the skill memory npc?
A: It must be me being careless and forgot about that, now I’ve fixed that. Move relearner can be found in Teal City after you download again.

Q: I’ve unlocked the Plaza, but can’t unlock Thorn island. Who am I missing?
A: Do make sure no one’s left in the dungeon, then Gym Leaders, Sonia, who can be found near Plasma island, then Nabelle in B.B. Hospital.

Q: is there a reward or something for beating the original girls on Holiday Plaza?
A: Not really, because the battles are more like the final challenge in the game.

Q: may I ask how to get to the Bramble Island, I also opened the Holiday Plaza. I searched all over the area and still can’t get into th
A: You mean Thorn Island? You need to make sure all gym leaders all girls in the dungeon were caught and find Nabelle in Blackblood Hospital.

Q: Where do I go after completing B.B.Hospital? The league is still being rebuilt
A: Go to Plasma Island to finish a event then go to Mt. Rebirth, then unlock the door in slave market, then the league will be unlocked.

Q: Where can I find Hoopa ? and how to trigger Calamity event
A: Finish the King’s mansion event, then go to Plasma Island to finish the event there, after that, go to Rebirth Island to continue.

Q: How do I finish unlocking the league? I already got Calamity and Hoppa.
A: You need to finish the event in the Slave Market as well, the door there can be unlocked after Calamity event and Blackblood hospital event.

Q: do you know if there is an object that fulfills the function of the amulet coin? is that I always lack the money XD
A: You can use Pheromone to attract new enemies in many areas, which should be a easy way to farm money and grind. And also, I guess I forgot to make Amulet Coin obtainable, now it’s fixed. It can be found behind a house in Plainland Town(Surf needed).

This game is a GBA Hack ROM. It’s Complete in English. 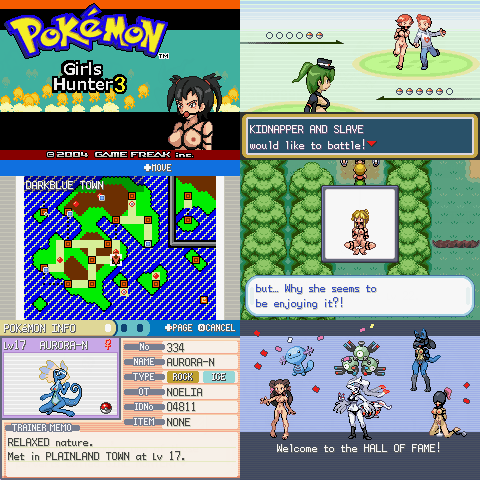 —CIA Version for Nintendo 3DS Below—