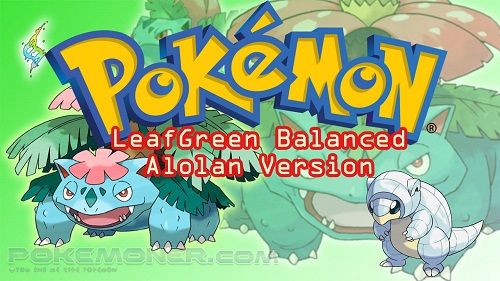 Name: Pokemon LeafGreen Balanced Edition
Remake From: Pokemon Leaf Green
Remake by: Gegalix
Description:
Pokemon is a beloved franchise that has captivated many of us since childhood. Its simple gameplay, large overworld, and memorable characters are unrivaled as many try to copy the formula, but fail.
But Pokemon isn’t perfect. Ever since the 1st generation, the arguably biggest problem in Pokemon consistently…is a lack of balance.

In the current meta game less than 100 Pokemon are viable. And that’s with me combining the Pokemon from Ubers and OU (at least in Smogons case). So even though we currently have over 720 pokemon, very few are viable.

Keeping this in mind, I decided to make a game that gives ALL Pokemon a chance to be used competitively. All 251 pokemon from Generations 1 and 2, as well as some Pokemon from Generation 3, have the same base stat total of 600. I have removed some Gen 3 pokemon so that I could include Mega forms and evolution forms( I will include a list below of which pokemon were cut). ONLY 1 POKEMON DOES NOT HAVE A BASE STAT TOTAL OF 600, AND SAID POKEMON HAS THE ABILITY TRUANCY.

This hack is perfect for battling others competitively as you now have 386 options to build a team, or if you ever wanted to play a hack that lets
even unevolved pokemon like charmander or squirtle shine, as they often do in the Anime.

Features:
All but 1 Pokemon have a base stat total of 600,more useful abilities then before, and better movepools
Unevolved Pokemon all have a Speed stat of 100 or higher.
NFE and fully evolved pokemon have a Speed stat of 99 or lower.
All Pokemon are obtainable in-game.
The Difficulty level for most trainers have been raised. This is especially true for Gym Leaders and the Elite Four. Some trainers give more money upon defeat.
Wild Pokemon are harder to fight, easier to catch (ONLY if unevolved, other wise much harder to catch) give more exp. for grinding, and now almost always have an item.
Ice types have been buffed. Ice now resists Grass, Flying, and Normal types. Ice is also now super effective against water types.
Poison type moves are now super effective against Water types.
Most Multi-hit moves deal more damage (15% to 25%)
Thunder, Hydro Pump, Blizzard and Fire Blast all have a higher accuracy (70% to 85%) and a higher chance of causing a status problem (20% to 40%)
Some Pokemon have been re-typed. Charizard for example is now a Fire Dragon. Stantler is now a Normal/Ice type.
All of these moves are now priority moves similar to Quick Attack:
Ember
Water Gun
Bubble
Sludge
Rock Throw
Powder Snow
Pound
Tackle

The following Pokemon on the left of the list have been replaced by the Pokemon to the right of the list: