Name: Pokemon Kanto Black
Remake From: Pokemon Fire Red
Remake by: Mystery Man
Description:
A world of only 5th and 6th generation Pokemon, the only exception being Eevee. The 5th generation Pokemon are all in Kanto while the 6th generation Pokemon are all in the Sevii islands.
• Many, many move tutor moves. There are probably more move tutor moves than TMs in this hack. They’re intended to open up more strategies.
• Difficulty rating system. What it does is rate your difficulty according to the settings you have picked. The settings you can toggle are: bosses with EVs and boss strategy levels. For now, it only encompasses bosses, but it is intended to be more expansive in the future.
• In addition to the physical/special split, new generation moves, abilities, and battle items.
• Sevii Islands! This time, you could visit them after defeating Lt. Surge! They contain the 6th generation Pokemon.
• Battle facilities! I’ll just say this: talk to the grunt in Celadon Mansion. The other battle facilitity you’ll find by unlocking Seven Island.
• Mini-games. Go to the Two Island Game Corner to play them. Later on, you’ll be able to use them to EV train quickly.
• Working VS Seeker. This time, it charges instantly, so no need to take 100 steps for each battle.
• More, of course. You’ll need to play through the hack to discover everything it has to offer.

In addition to changes in levels, some bosses specialize in different types. Specifications:

Boss – Strongest Pokémon Level – Type
Gym Leaders:
Brock – 12 – Rock
Misty – 20 – Ice (switched with Lorelei)
Lt. Surge – 25 – Electric
Sevii Islands quest #1 can be completed.
Erika – 34 – Grass
Koga – 43 – Bug (hardly any Poison types in generation 5)
Sabrina – 50 – Psychic
Sevii Islands quest #2 can be completed (retrieving one of the stones). Completing this will unlock the rest of the islands.
Blaine – 55 – Normal (Agatha specializes in Fire due to the type having more difficult Pokémon to deal with)
Giovanni – 58 – Dark (due to a lack of Ground types)

All battle facility trainers have fully EV trained. These levels are taken from the normal difficulty. Challenge and omega mode have slightly higher levels towards the end (difference: +2).

Notes:
This game is more linear than the original Firered. There will be obstructions blocking your path until you defeat the accessible gym leader at the particular point you are at. Consequently, Surf cannot be used in the overworld until after you defeat Sabrina.
• Most alternate forms are in, not all.
• All Pokémon with 600 BSTs can be used in the battle facilities. This means that Genesect, Meloetta, Keldeo, and Victini are allowed, all of which are banned in the main games.
• Secret Power has been changed to deal special damage rather than physical.
• A second stone merchant can be found in front of the gym in Saffron City. He sells the remaining evolutionary stones, plus the Trade Stone for Pokémon that normally evolve by trade.
• An elderly woman in Route 23’s trainer house will give you the Reveal Glass if you have Tornadus, Thundurus, or Landorus in your team.
• TALK TO THE TEAM ROCKET GRUNT IN CELADON MANSION.
• Normal mode has a bigger focus on matching generation 1 counterparts, so to speak. Challenge mode bosses have a more strategic focus. Omega mode bosses all have 6 Pokemon and more difficult strategies than challenge mode.

List of Move Tutors:
• Universal tutors can teach every Pokémon except Egg and Tynamo the move they have to offer.
• Type tutors teach Pokémon of the type they specify in addition to a few others.
• Tutor 1 – route before Vermilion City.
• Tutor 2 — route south of Fuchsia City.
• Tutor 3 — Four Island
• The other tutors are in the battle facilities.
• Move Reminder – Two Island (must have Secret Key because Pokemon can learn their best moves via this method)
• Ultimate Move Tutor – Hydro Cannon, Blast Burn, & Frenzy Plant – Two Island

Changes from 2.01 to 2.02
– Changed Omega Erika’s strategy a little bit to make her more difficult.
– Frost Breath details should appear now when you select it in the multichoice prompted by the Red Shard tutor.
– Keldeo learns Aura Sphere via move relearner for once I can add Secret Sword.
– Along with Cinnabar Mansion, Deino can also be found in Route 23.
– Serperior’s second ability is now Defiant instead of Shed Skin. Should be fun when used in conjunction with Dragon Dance via move relearner.
– Raised Watchog’s defenses.
– Woobat, if it has not evolved through happiness, will evolve at Lv. 25.
– The Scraggy line can have Moxie again. Hooray!
– Furfrou learns Wish instead of Recover to make it more in line with Pokemon of similar species.
– Emolga’s second ability is now Prankster.
– TM compatbility fixes for: Gothita line, Archen line, Sigilyph, Tirtouga line, Boldore and Gigalith.
– The Reveal Glass should work correctly now, but I’m not too certain. Please let me know how it is working now if you have immediate access to it. Also, REVERT YOUR -ORUS TO THEIR INCARNATE FORME BEFORE SWITCHING TO THIS PATCH! OTHERWISE, YOU WILL NOT BE ABLE TO SWITCH IT BACK!
– Lucre Tour will temporarily cost 5000 Pokeyen for until I fully explore the script. In my immediate tests, it worked fine, but I have received several reports of it not working. If you play the game, please save before playing.

Changes from 2.07 (2) to 2.08:
– Gave Floette (eternal form) a proper icon.
– Foul Play is added with its own animation. Tested. Should work properly. Finally, Klefki and a few other Pokemon can be useful without me being too liberal with their stats/abilities. Credits to DizzyEgg.
– Freeze Dry is also added and appears to work correctly. This move also improves the usability of many Pokemon (Cryogonal is slightly better with it), hence why I added these two over others. Credits to KDS.
– Nulled out the special that activates the roaming Pokemon (which are now just weird Pokemon). If you have already completed the Sevii Islands quest, they might still be roaming around. What I did is just stopped it from activating.
– Added on to some messages that previously only talked about a lack of access to an area. 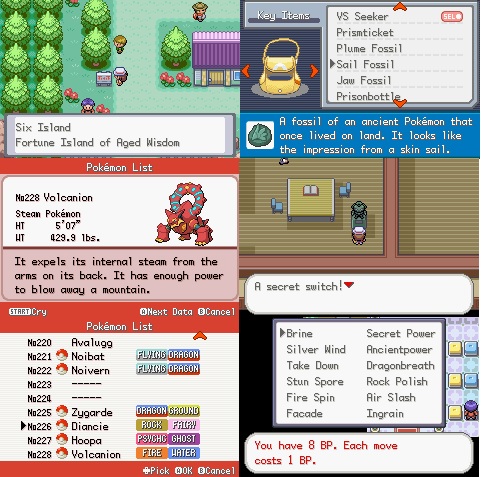