Name: Pokemon Korosu
Remake From: Pokemon Fire Red
Remake by: Crizzle
Source: Click here!
Description:
Pokemon Korosu is vastly different than my previous hacks, which both often tried to be “funny”. This hack is a bit more serious(as you can tell as Korosu means “to kill” in Japanese). Despite that, this hack is still in the same messed up universe as Pokemon Outlaw and could even be considered a sequel of Pokemon Outlaw. You don’t have to play Outlaw to understand the hack’s story but events from Outlaw are referred to. Here’s a recap of relevant events from Outlaw, so no one has to suffer(or enjoy) going through that one just to play this one

Pokémon Korosu is initially a story of revenge, based partially(not really) on my favorite movie Kill Bill(Vol 1, Vol 2 was good but not nearly as good as Vol 1).
This is a story of a young lady who finds herself in a difficult situation. Her family has been killed and she has been kidnapped by a harsh, mafia-like criminal group and has been doomed into a life of human slavery. PredictablyEventually, she escapes(with some help) and she sets out for a quest to get revenge against those who have ruined her life. That’s the 1st part of the story. The 2nd part of the story will have more to do with Pokemon Outlaw.

WARNING: While this game is not as stupidly vulgar as Outlaw, it’s incredibly dark and violent. There’s also a couple instances of pretty bad profanity. It’d definitely get at least T(if not M) on ESRB.

I’m really happy that I can make a hack like this one because I wasn’t good enough of a ROM hacker to make this when I first started last year. This would be the kind of hack, I would have made at the start but I had to settle for editing a lot of text and making it “funny”(and being quite successful at it apparently.)

Features
Unlike my previous nostalgic hacks, I’ve decided to modernize a little bit so the features could be a little more appealing. (The tiles are still pretty nostalgic though.)

-Some Gen 4-6 pokemon. Still mostly gen 1-3 pokemon but I decided to add some of my favs from other gens(spoiler: mostly as opponents. Though one will be given to you. ). It’s a very small list of Gen 4-6 pokes. Here’s the list:

Shinx and it’s evolutions
Leafeon(Leaf Stone), Glaceon(New Item: Ice Stone)
Roserade(Leaf Stone, IRC), Weavile(Ice Stone)
Gallade(Moon Stone on a Kirlia before it turns into a Gardevoir at lvl 35. Yes, there can be Female Gallade… Insert offensive gender identity joke here to distract from my lazyness
Lucario and 4 other pokemon that you’ll have to play the game to find out!

-A completely new story, a bunch of new events and characters. I’d call it a new and unique Pokemon journey. Not merely a 8 badges, evil team, Elite four kind of game.

-Main character kills a LOT of people. Probably unprecedented in any Pokemon hack.

-No waiting to get running shoes. You get to run at the start of the freaking game. Why do you need special shoes to run? Also can run indoors.

-Fixed that stupid trainer facing thing that made no sense,so you actually face the trainer if the trainer challenges you.

-Still NO FISHING. DEATH TO FISHING! (Honestly, I don’t hate fishing. I just have no motivation to make fishing overworld sprites.)

-Here’s good spot for a warning that this game will probably get really difficult at various points, particularly in the beginning(where you’re kind of put in a tough spot).
-Also a good spot to tell you that the starter Pokemon for this game should be really obvious by now. If you still don’t know, play the game and find out.
Screenshot: 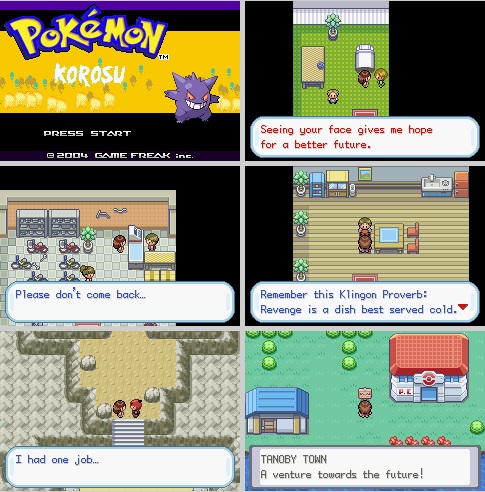