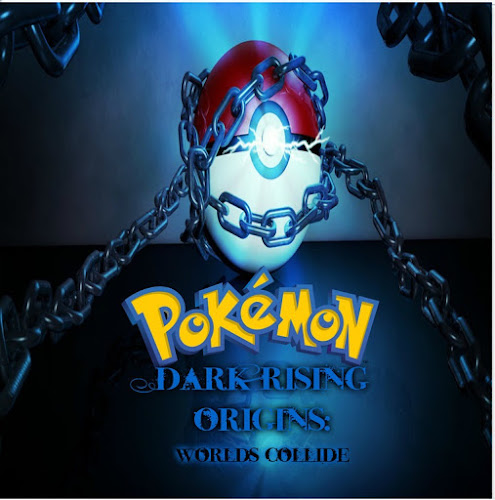 An outbreak has plagued the Ferrum Region. Digital Monsters known as Digimon have merged their data with the DNA of Pokemon. You, Ryu/Ryuko, will join an elite team of Pokemon Trainers known as Team Dark Rising, to investigate the phenomenon and defeat the 7 Great Demon Lords, who have been unleashed by the Satan Pokemon, Darugis.
Features:

Glitches within the Rom Base (These problems can only be fixed by the creator of the Rom Base, so I cannot give an estimate to when or if they will ever be resolved)-
– Magic Bounce can cause errors when used by opposing Pokemon in Trainer battles (Has a chance of deflecting damage attacks programmed as status moves such as Moonblast)
– Infiltrator and Magic Guard are not 100% complete
– In battle, the ability Snow Warning can sometime tell you what your opponent’s ability is in an odd text. (For example: “Frigimon’s (insert your opponent’s ability here) made it hail”)
– A few moves do not have their correct effects, but they do work.
– Sticky Web occasionally does some odd things.
– Although Moonblast functions as it does in the 3DS titles, it’s programmed as a status move and thus will not work with Assault Vest (Still does accurate damage output)
– If a wild Pokemon is holding an Assault Vest, the text claims that the item is preventing you from running. This is not true, and the escape rate is calculated normally.
– Life Orb and Rocky Helmet are not fully implemented yet.
– Geomancy does nothing but waste the player’s turn absorbing power.
-When you attack an opponent that has the ability “Gooey”, it says that the opponent’s speed has been lowered, but it’s actually Your Pokemon/Digimon who’s speed was lowered. (In other words, the ability works as it does in Pokemon X & Y, but the text is wrong)
– Solid Rock and Filter may weaken normal effectiveness moves

Minor things that I Can fix in the final version-
– All of the data within the “DigiDex” is complete, but some words may overlap the screen or be spaced too far apart.
– Mega Swampert & Mega Alakazam do not have shiny sprites.
– Not all Digimon have shiny sprites.
– All Cries are not inserted.
– Town Map is not updated
– The image for the Fire Stone is glitchy, but the item still works.
– Beelzemon has Deoxys icon in the Pokemon menu.
-If Calista sends out a Bad Egg & the battle is Not a double battle, you’re playing an outdated version of the game & need to download version 1.3 below.
– Some Digimon sprites are temporary placeholders & will be updated for better quality in the final version.
Hints & Tips
– The move, “Knock Off”, is one of the best moves in the game due to it’s effect of removing held items from opposing Monsters in battle. Gym Leaders & Event Trainers will always have held items on their Monsters, so removing them is an effective strategy to winning the more difficult battles.
– When team building for the challenges that await you, be sure to use both Pokemon and Digimon. Although Digimon may appear stronger at first, they often evolve slower than Pokemon, which could put you at a disadvantage mid-way through the game.
– A solid “core 3” to center your team of Monsters around would be Steel/Fighting/Fairy.
– The most powerful held items such as Eviolite, Choice Specs/Band/Scarf and Life Orb are hidden throughout the game and cannot be brought from shops. Try searching every corner on routes and paths. You may just find one of these rare items!
Screenshot: 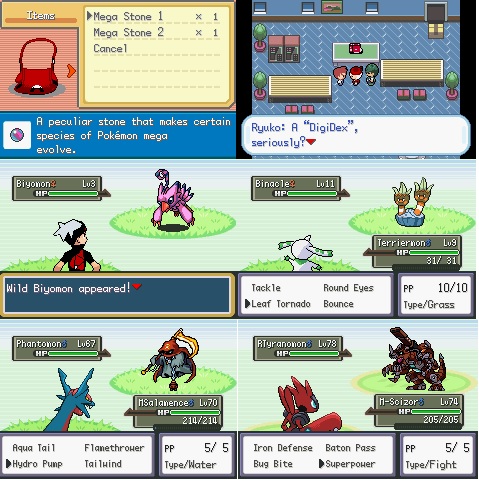