– New moves from Generations 4-6
– Plenty of changes regarding Pokemon, including stat changes, movepool additions, typing changes, altered wild distributions, and even new Pokemon altogether.
– Movesets and rosters given a complete overhaul, making the early-game a lot less punishing and increasing the challenge of the late-game.

The plot, the large majority of the dialogue, and the tilesets remain unedited (although there are some very rare map changes).

– This hack uses Doesntknowhowtoplay’s Physical/Special split, meaning Counter and Mirror Coat will work as they should, weather boosts/decreases the power of attacks as it should, etc. A notable side affect of doing so was increasing the Special Defense of Rock types in sandstorm, which may come into play at some point in the game.
– Riolu evolves at level 25 instead of by friendship.

-Steel no longer resists Dark and Ghost, just like in Gen VI.

-If you have looked at the gym leader levels yet, you may notice that the level curve has changed from the original Glazed, most drastically in Tunod. If you haven’t, just know that it’s changed. You may feel a bit behind the curve if you don’t grind a decent amount but not drastically far behind.

– Team Fusion grunts in Tunod will carry Fire, Ice, or Electric Pokémon in addition to their Fighting types. The most coveted TMs are of these types, so now they have a bit more variety. The Drudges do not follow this theme.

– Hidden Power uses Generation 6 mechanics, always being a base 60 power.

– Standard Eevee is now Def-Eevee (defensive). It can be evolved into Off-Eevee (offensive) with level up (all Eevees will come with rare candy), and can be evolved back into Def-Eevee via the same method. They are statistically, aesthetically, and functionally the same, with differences in what they evolve into:
Eevee-Def evolves into Vaporeon (water stone), Umbreon (moon stone), Leafeon (Leaf stone), or Sylveon (Sun Stone).
Eevee-Off evolves into Jolteon (thunderstone), Flareon (fire stone), Espeon(sunstone), or Glaceon (Moon Stone).

– The Spore tutor at Serenity Isle now teaches Curse, while the Leaf Blade tutor teaches Seed Bomb. As before, all Pokémon can learn both.

– I used the Smogon abbreviations for the Rotom forms: Rotom W (Water), Rotom H (Fire), Rotom-C (Grass), Rotom-F (Ice), and Rotom-S (Flying). You can evolve Rotom into them via the evolutionary stones (check the documentation for more information).

– Scarf Pikachu is no longer a pushover: It has much better stats now, and it learns a lot of new moves based on Pikachu events (for example, from level 40 onwards it knows Icicle Crash, so keep your Torterras away). All it knows in the Forest Pass fight is Growl, however.

– Most fully evolved Pokémon will have level 1 moves they can’t learn otherwise. Check the Move Relearner in Seaspray or Blackthorn City often.

– Goldenrod Gym is now Fairy-typed, as you should tell from the Gym Trainers.

– Northcoast Peak, the ice area of Johto’s Victory Road, and Nitro Isle are now infested with Delibirds, which have a raised exp yield. They make nice grinding spots.

-You will need to beat Silver before you are able to reach Whitewood. You will have to go west from Olivine after meeting with Ernest in front of the Azalea Town Gym.

Derps and bugs:
-The girl who gives you a Pokemon in Oceanview City doesn’t have dialogue after she gives you it. This doesn’t affect anything though.
-The Fossils bar the Anorith line aren’t in the Pokedex. This is intentional.

-Michael and Regina battles have the Magma intro, as I changed their trainer class to have that cool battle theme. Disregard that.

-The Drain Kiss animation causes a lag spike on a few emulators. If it does anything strange other than that, let me know.

-I was unable to edit the some of the tutor moves for some Pokemon I added into the game, which allows for stuff like Rotom-Heat with Ice Punch to be a thing. 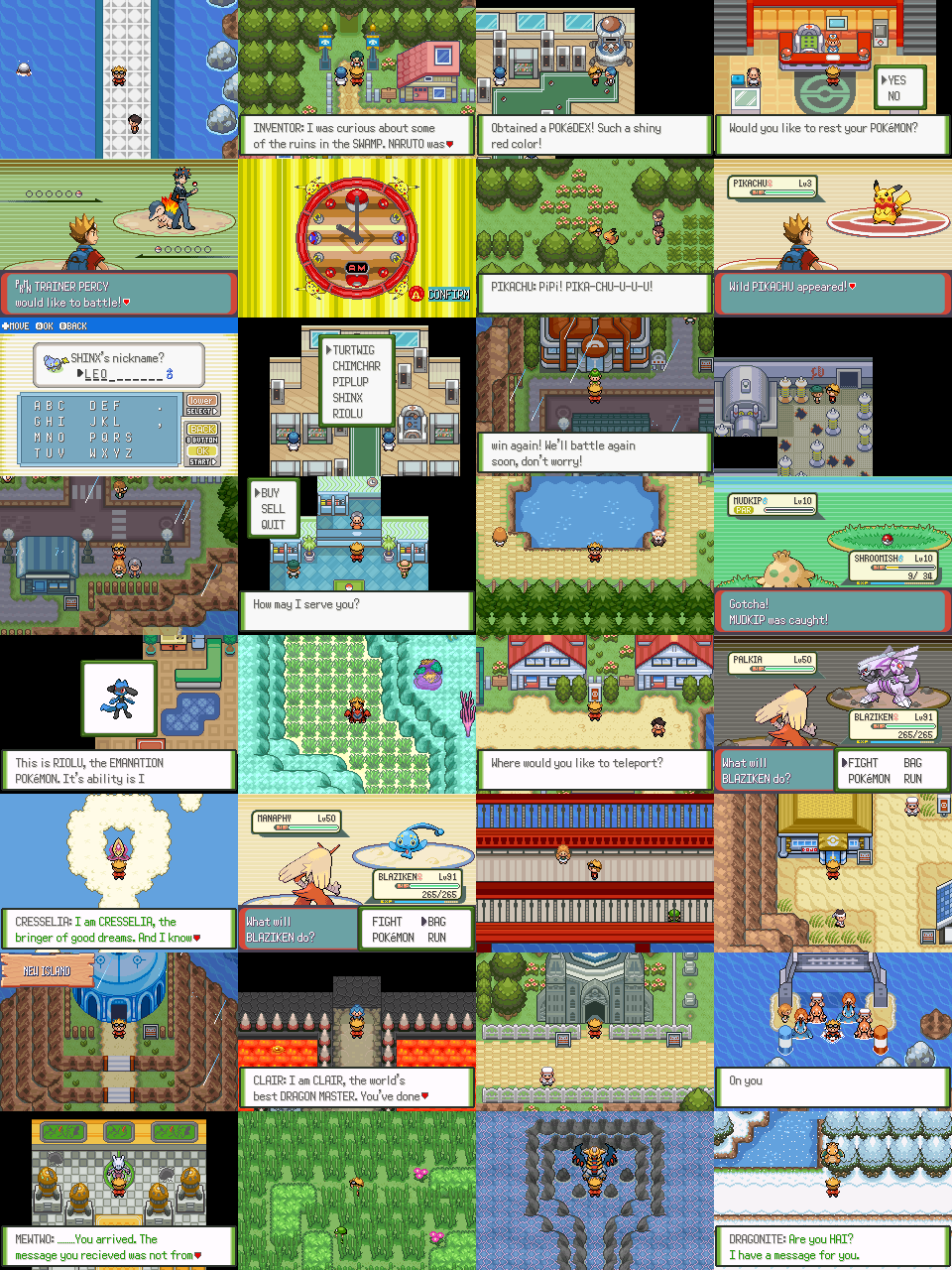