Name: Pokemon Mars
Remake From: Pokemon Fire Red
Remake by: Far Way
Source: Click here!
Description:
PLOT
Red is an experienced teenaged trainer on a groundbreaking quest. A few years back, after defeating the Elite Four for the 3rd time, he agreed to an upcoming project. He didn’t know what this would be, just that it would be fun and adventurous on all sides. Now, the time has come for him to play his role in this project. Red and a partner are going to Mars in a space shuttle built by none other than Kanto’s own Professor Oak. However, when he arrives during a Martian general election, he finds out that one of the candidates, Fortitudo, is a very corrupt person on the inside. Can he reveal Fortitudo’s secret once and for all? Or will he just be dismissed as just an “earthling”?

FEATURES
New alien forms of Pokemon
No rival. Rival was instead reworked into a partner to aid you in your space mission.
Aliens in disguise, sneaky aliens that dress like humans but soon turn out to be aliens desperate for battle
Ability to explore Pallet Town and Viridian City while still on Earth
Mars has its own version of the Pokemon League and Gyms
More to come soon!
Screenshot: 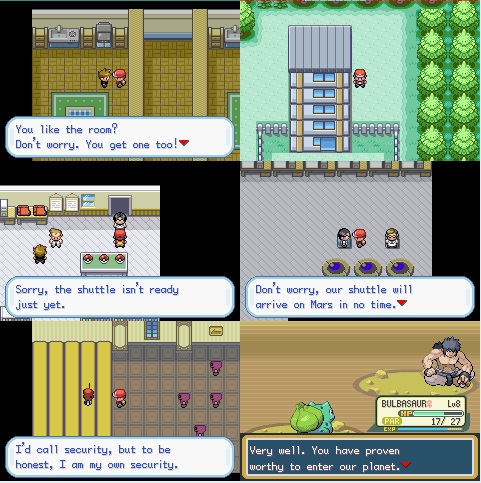