The storyline follows the same as Pokemon Emerald but the catch is that every Pokemon has Wonder Guard as an Ability instead of their normal Abilities. (Note: Wonder Guard Ability means that only “Super Effective” Moves Hit the foe). I know this sounds silly at first but my reason for creating this game was that so people could use a Randomizer or do Nuzlockes as a challenge not so that people would play it as is. Although you are more than welcome to play it as is too!

Features/Additions:
Other than the fact that all the Pokemon do not have normal abilities I added some other things with the help of other hackers.

*Fairy Type along with other Fairy moves is now available (Thanks to LLCoolJ95 over at PC and his Emerald Base).
*Sylveon is now available (Thanks to Aethestode who is my inspiration). You can find it instead of the first In Game Trade. (Note: You CANNOT evolve Eevee into Sylveon and you cannot catch it in the wild due to a glitch.)
*Altered Movesets for some Pokemon (I know certain Pokemon do not learn certain moves but I did this in order for the game to be beatable).
*Difficulty increase makes the game somewhat harder but it is not fully complete.
*The starters from all 3 regions can be caught before you get to the first gym. (You’ll just have to find them).
*Evolution changes for Pokemon that need to Evolve through trading.
*Marts have different items.
*Event Tickets are purchasable at the Elite 4 (Note: See Glitch Section at bottom).
*DNS: There’s a Day and Night System Now.
*Altered Types on some Pokemon.
*Shedinja has more than 1HP to compensate.
*You get to battle me instead of Steven after you beat the game.
*Some other surprises you’ll have to find on your own 😀 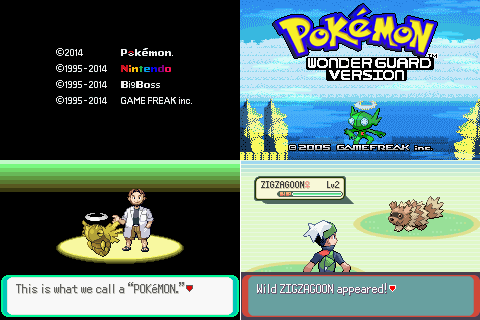