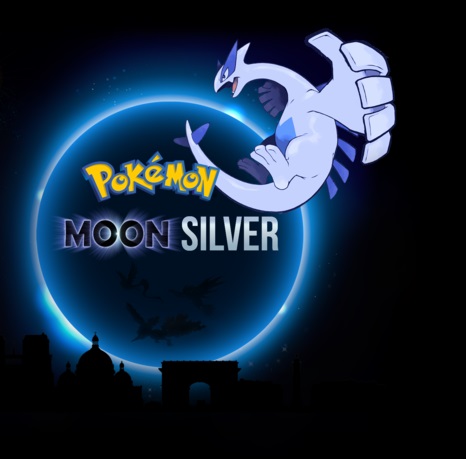 Name:
Pokemon Moon Silver
Remake From:
Pokemon Soul Silver
Remake by:
walnut3072
Description:
The main point of all changes is to bring out the potential every Pokemon from rarely-used to over-used so that players can use their favorite Pokemon in tough battles. That also means, not only weaker Pokemon are made better (with reasonable stat boost, new moveset,…) the commonly-seen ones are given new abilities, moves or even type to create a fresher experience. Some notable type change include:
• Fairy-type Pokemon: Beside 20 Fairy pokemon in gen VI official game, there are additionally 13 suitable Pokemon receiving Fairy as their secondary type (e.g., Meganium, Mareep line, Milotic, Misdreavus, etc.).
• New Dragon-type Pokemon: Charizard, Onix, Steelix, Sceptile and Huntail.
• Other than that, some Pokemon have their type modified to match their appearance better (e.g., Gyarados – Water/Dragon, Seviper – Poison/Dark, etc.) and/or, hopefully, more competitively viable (e.g., Ledian – Bug/Fighting, Quilava & Typhlosion – Fire/Ground, Butterfree – Bug/Psychic, etc.).
Starters are now more competent with new abilities, moves and type changes such as Venusaur with Thick Fat, Blastoise with Drizzle, Feraligatr with Shed Skin, Sceptile with Adaptability, or the Water/Ice-type Empoleon with Snow Warning. However, to maintain the balance in game evolution level are raise to 25 for 2nd stage and 46 for final stage Pokemon, whose Lv-up rates are also changed to slow. I think it’s great to spend more time in game with the 1st and 2nd stage Pokemon.

There is a total of 157 moves receiving changes in this hack. Generally, there are 3 levels of change:
1. Slight adjustments in terms of power or accuracy.

2. More significant revamps such as type or category changes (e.g., Pay Day is now a special Steel-type move with 65 power while its ‘bonus-gold’ effect is still there). These moves are indicated in bold in the document and can now be learnt by much more suitable Pokemon when leveling up.
• Rarely-used early status moves such as Tail Whip, Sand Attack, Smokescreen,… are now either special or physical damaging moves with their effects kept unchanged. Leer is now an early way to get items from wild Pokemon in the first routes since they may now hold some useful items.
• Sonic Boom (Power: 15) and Power Whip (Power:30) now hits 3 times in a row with their power rising by 10 after each hit.

3. And lastly, 30 moves have been totally tranformed into new ones with new effects, type, and power. Some notable groups include:
• Draining Moves: Draining Kiss, Vampiric Bite, Vampiric Aura, Purification and Cold Embrace.
• Raise-all-stat Moves: Sacred Fire, Primal Light, Nature Grace and Lucky Break. All moves from this group (including Ancient Power, Silver Wind and Ominous Wind) have had their power and effect chance boosted to 72 and 20%, respectively. Lucky Break is the only move in this group having an increased priority and it’s only available to the Lv-up movesets of low-stat Pokemon.
• Cool-looking-but-rarely-used moves such as Blast Burn, Frenzy Plant, Storm Blast, Fissure, Mist Ball,… have been greatly revamped for competitive use as well as distributed to the Lv-up moveset of many relevant Pokemon.
• Random Effect Moves (like Tri Attack): Dragon Breath, Void Vortex and Ghost Punch
• Gen 5 and 6 similar moves: PowerUpPunch, Volt Switch, Steam Shower (same as Scald), and some Fairy-type moves.
• And lastly, two ‘theme’ moves of this hack: Sunraze and Moonraze have also been distributed to the movesets of 29 suitable Pokemon.
Type Match-Up Chart:
There is a total of 32 changes made in the type chart, which also has its own document. Overall, the idea is to, hopefully, further balance the game as much as I can while also considering the logical factor. Not all changes come from my personal experience. There are also ideas that I gathered from fans in many discussion threads and then selected the ones that make sense to put in the game.
Notable changes are from the Fairy type. Offensively, Fairy is now s.e. against Dark, Ghost and Dragon; deals normal damage to Fire, Fight and Poison; and is ineffective against Normal, Grass and itself. To explain, I wanna turn the Fairy type into something ‘holier’ or more ‘sanctified’ so that it’ll fit better with the new moves such as Primal Light and Purification. And since fairies are supposed to be good creatures who protect nature, this type should deal less damage to Grass, Normal and itself. To balance the game, Fighting is now weak to Ghost and no longer resists Bug; and Ghost Pokemon are no longer weak to Ghost-type moves.